Timeline and Her Life's Work

“I can do all things in Christ who strengthens me.”
Philippians 4:13

Born 2 months premature to a large family in Sant’ Angelo Lodigiano, province of Lombardy, Italy on July 15, 1850, Francesca Cabrini was in delicate health most of her life. As a young girl, she nearly drowned, resulting in a lifelong fear of water. Yet, she crossed the ocean 27 times, often at great peril, to continue doing God’s work. Even though she had this great fear of water, her passion to bring God to people and people to God is what overcame her actual fear of water.

Francesca Cabrini was educated at home by her older sister Rosa. Although frail from her premature birth, she worked fervently at her studies, and years later, after her parents died, she became a teacher. But from an early age Francesca Cabrini  was fascinated by missionaries who spoke of their experiences of spreading the Word of God in the Orient. Hearing these stories, she wanted to become a missionary but had been rejected by existing religious communities because of her poor health. However, a local bishop recognized her zeal and boundless energy, and encouraged her to start her own religious community.

Thus were born the Missionary Sisters of the Sacred Heart of Jesus. Led by her passionate love for God and his people, and her zeal to make this love real in the lives of those she served, Mother Cabrini lived her life inspired by the words of Saint Paul in his letter to the Philippians 4:13: “I can do all things in Christ who strengthens me.” 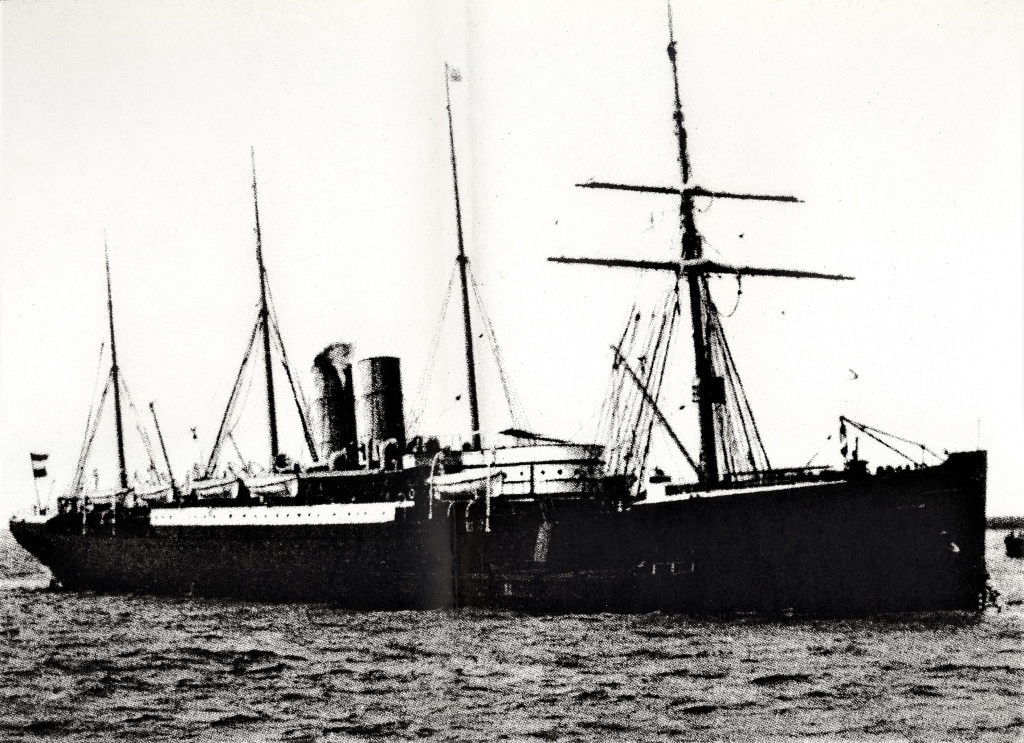 Over the next years, Mother Cabrini Her dedication, hard work and passion brought her to the attention of Pope Leo XIII, who helped Mother Cabrini realize .

After founding the Missionary Sisters of the Sacred Heart of Jesus, she spent some years developing the order and expanding their missions throughout Italy. She founded several schools, orphanages, and even supervised a hospital in her home country.

Her boundless energy and missionary heart caught the attention of Bishop Scalabrini of Piacenza. He spoke of her with Pope Leo XIII. Her lifelong desire of becoming a missionary to China was not to be in a way she, or anyone else, would expect. Both felt that Mother Cabrini’s true path led to America, where millions of Italians had already emigrated. Many of them were in need of basic education and healthcare and a way to practice their faith in the New World.

It was Pope Leo XIII who said to Mother Cabrini, “Not to the East, but to the West”. So it was that she and 6 of her sisters embarked for America in 1889, leaving Codogno by train, arriving eventually at Le Havre, where they would depart on the good ship Bourgogne with 1500 other immigrants bound for New York City.

The Sisters traveled in second class. Their daily journals speak of rough seas, constant seasickness, and the difficulties of those traveling in third class, whose accommodations they described as “no better than a stable.” Yet despite their discomfort, the Sisters spent their days helping out the less fortunate on the vessel. Freezing weather and a near deadly storm followed the ship on its 12-day trip across the Atlantic. When it arrived in New York, the weather was warm, the day clear. And Mother Cabrini’s work in the New World was about to begin. 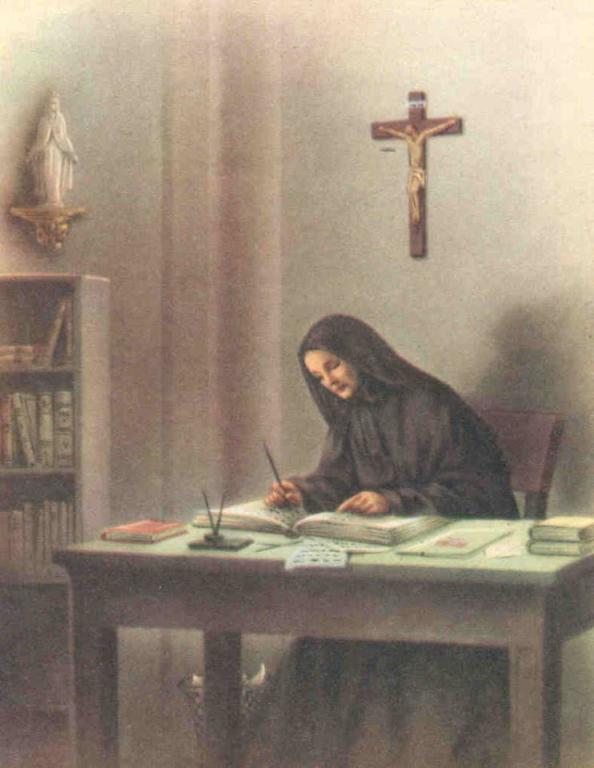 God is in the Details

Mother Cabrini, The Universal Patron of Immigrants in the Catholic Church, was known for her love of God and her service to His people. She was also a shrewd business person who paid close attention to the details of each institution she founded. One story centers around the purchase of the building at the site that would become Chicago’s Columbus Hospital. Mother Cabrini doubted the accuracy of the property measurements listed in the real estate contract and thought she was being cheated. In the middle of the night, she and her Sisters tied shoestrings together to create a makeshift tape measure. Sure enough, they discovered mistakes, and adjusted the contract, in their favor, accordingly. Columbus Hospital went on to become a pre-eminent healthcare institution in Chicago for the next 97 years. 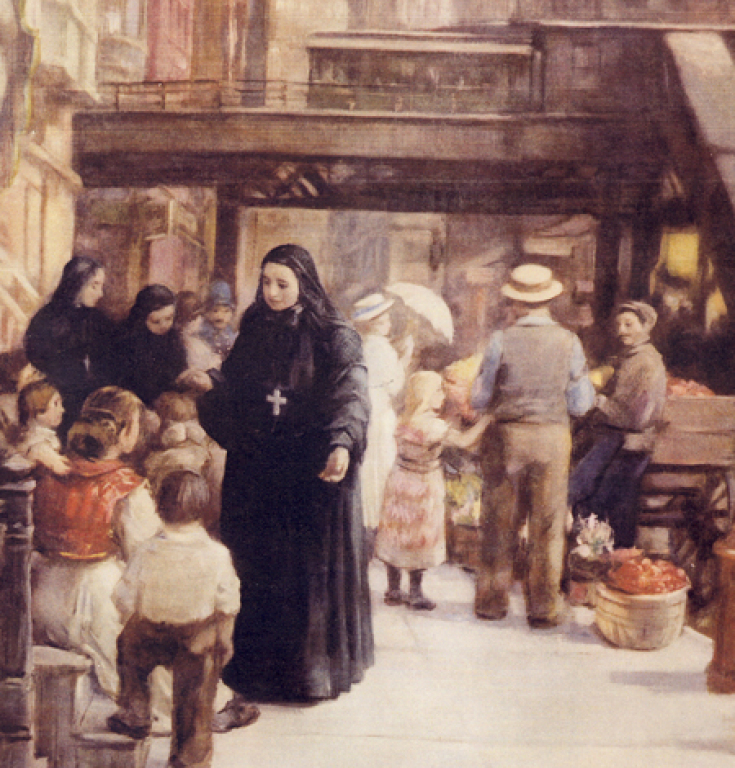 When Mother Cabrini first arrived in New York City with her Sisters in 1889, they soon found the bustling city not very welcoming. Far from their home in Codogno, Italy, and unable to speak English, they were still full of hope and anticipation for their missionary work. However, their New York hosts had not fully prepared for their visit. As a result, their first night in New York found the sisters huddled in a filthy room in the Italian ghetto, as their lodgings had not yet been readied. The next thing they discovered was that their missionary stipend, the money they needed to live and eat, was also not available to them.

Undaunted, the Sisters went forward with their work. When necessity called, they would beg for food and supplies door to door in the Italian neighborhoods of the lower West Side.

It was not long before benefactors came forward, inspired by the tireless efforts of the Sisters. Valuable property near 59th Street was donated by the wealthy Countess of Cesnola. The sisters soon opened an orphanage there, and it also became their living quarters. Within two years, the sisters helped open Columbus Hospital on East 19th Street and secured land for an out-of-town home for the orphans in upstate West Park, New York.

Mother Cabrini’s success in New York soon brought her to Chicago, which faced many of the same immigrant issues. Chicago’s poor but growing Italian Community desperately needed schools for the young, and better access to healthcare and spiritual guidance. 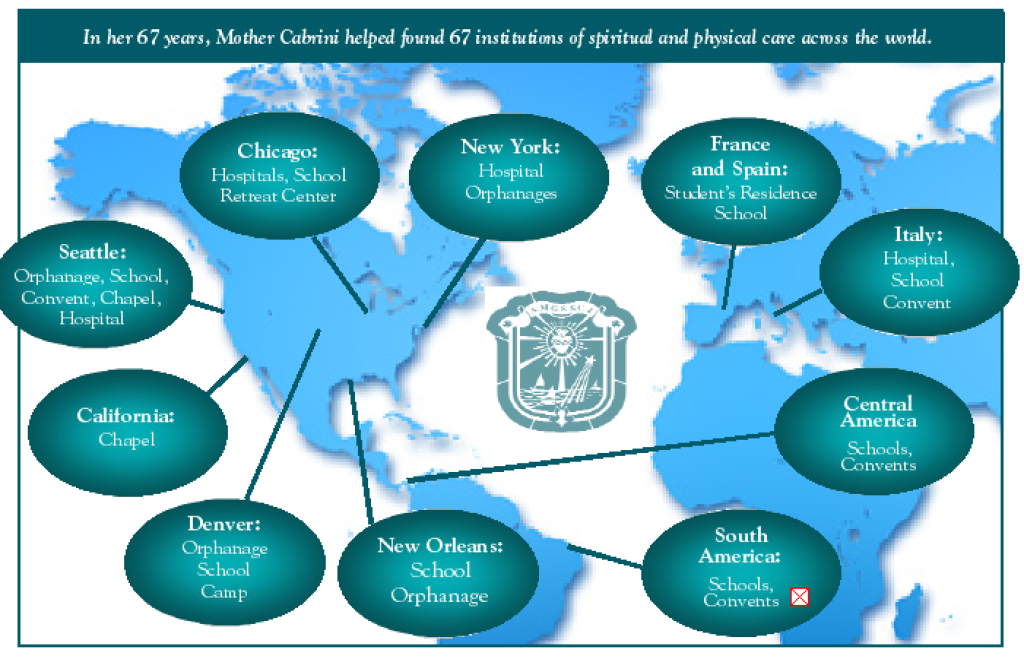 From New York to South America and Beyond

It did not take Mother Cabrini and her Missionary Sisters long to establish remarkable success by tirelessly working with poor Italian immigrants wherever they lived. They delivered basic education, healthcare and spiritual guidance to poor Italian communities across the United States. So amazing were the results of their efforts that they became in demand everywhere Italian immigrants settled.

The great emigration of the late 19th and early 20th century saw millions of Italians leave their own country and relocate to North and South America. In the US, there were large colonies in New York, the Midwest, Colorado and on the West Coast, anywhere labor was needed for factory work, building railroads, mining metals or farming. Wherever these settlements were established, Mother Cabrini and her Missionary Sisters were called to tend to their physical and spiritual needs.

Not long after Mother Cabrini’s success in New York, leaders of the Italian church requested that she expand her missionary work beyond the East Coast. By 1895, she had traveled to many cities in North America and had even been to Nicaragua to establish a school there for Italian children. To accomplish this, Mother Cabrini needed to attract more women to join the Missionary Sisters, which she did through the example of her endless energy and devout piety. Those who joined her order over the next two decades would soon swell to an amazing number worldwide. 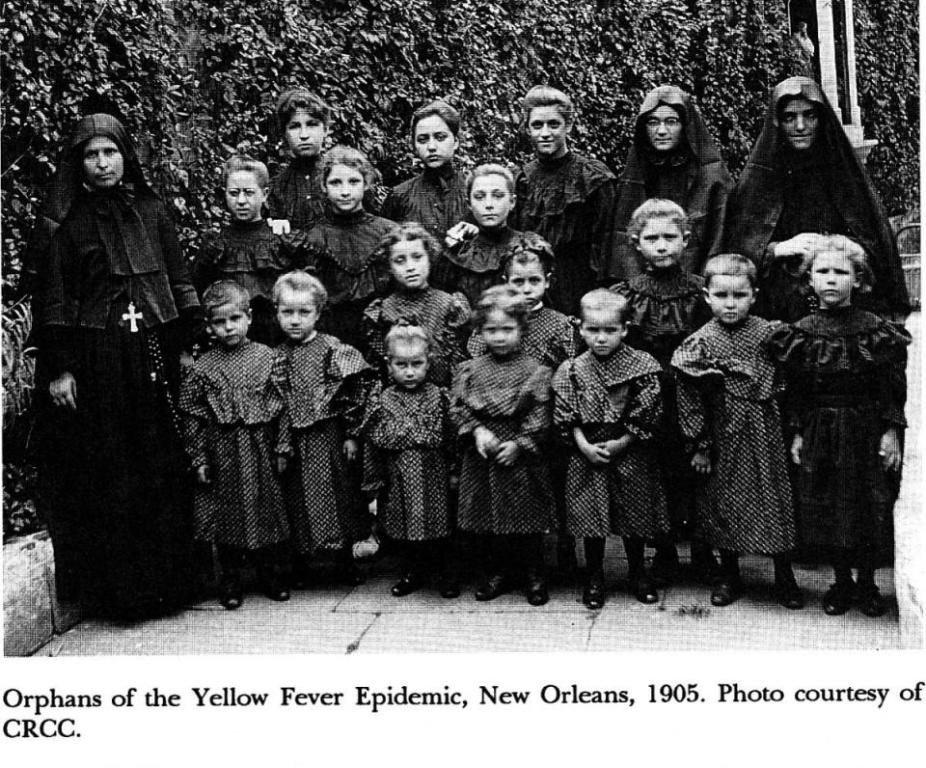 The Missionary Sisters in New Orleans

In the 1890s, the large Italian community that had immigrated to New Orleans faced prejudice and fear from local residents. That fear eventually led to violence and the killing of a group of Italian men. Mother Cabrini and her Missionary Sisters were asked to visit the city to intercede. What they found was the entire region caught in the grasp of a yellow fever epidemic that had claimed the lives of many Italian parents. The Sisters soon established an orphanage there to care for the children, though they themselves were exposed to danger from the deadly disease. They faced these difficulties willingly in the true missionary spirit of their order.